I grew up in Patchogue a small town on Long Island and went to Patchgoue-Medford high school. After barely escaping high school for whatever reason I ended up on some high horse to take some kind of Criminal Justice class at Suffolk County Community College. That college stint only lasted the 6 weeks of cutting class it took me to realize that school just wasn’t my thing.

By the time I was done blowing it in college I had easily plowed through about 12 jobs and somehow ended up getting a job pushing carts at the Home Depot in Patchogue, I believe it was Store #1205 (which is gone now btw) department 96!!!! Sorry, we had a killer team back then, maybe the best “Lot Guys” to ever dawn a Home Depot apron and push carts, Lot Guys are department 96 by the way. Very tight group.

While at Home Depot I truly had the best mentors I could possibly have for the time frame I spent at the Depot. I worked for Home Depot for 10 years in 3 different states, at 10 different stores. As I traveled that journey I moved from position to position, covering everything from Lot Attendant, Killer Be, Department Manager, Assistant Store Manager, to Loss Prevention Supervisor (LPS).

My highlight at Home Depot was probably when I put together a team of merchandisers known as the “SMART Team”, I hated the name but it stood for “Strategic Merchandising and Research Team”. This team was built out of the Westbury Home Depot under K. Morrow and K. Williams, two Store Managers that were awesome mentors. Anyway, the SMART Team focused on creating high GMROI display and caps in areas you wouldn’t typically consider merchandising.

At some point in 1999 I started to get pretty bored with what I had been doing at Home Depot, they were going through some crazy changes and obviously I was too. I decided to start building little websites, then I started to generate traffic at which point I started putting text link and banner ads on my websites.

I made some pretty sweet cash back in the day as an affiliate marketer for other people’s products, that began to change about a year after getting that venture going and it wasn’t changing for the good. Many affiliate programs stopped paying or had crazy conversions, it bothered me enough to start my own membership areas in order to sell memberships online. That quickly became a new adventure into having affiliates via an affiliate marketing program.

At one point I founded and operated 3 separate major affiliate programs at one time, all built in-house with the concepts of my associates and myself. Together these 3 affiliate marketing programs paid out over $2 million a year in affiliate commissions combined and generated over $4 million in revenue yearly. All of which was built on pennies, well actually the last of my Home Depot stocks and vacation pay to be precise.

Wow time flies, coming up on about 9 years now since I sold off the two major affiliate programs to a private buyer. Craziness.

Anyway, after selling off the two affiliate programs and dissolving the third into one of the other two existing programs I felt the need to go back to my Home Depot roots I guess. In the mist of my years of affiliate mayhem and madness my wife and I managed to build a couple of indoor tanning salons, something I considered selling a while back as well. I never really saw myself as a tanning salon owner to be honest, somehow it just happened.

I have a love addiction to cars, I love them and a big part of my addiction to cars can be seen in the limousine business that we founded and trademarked two years ago. Insane Limos, Inc. consisted of a massive 30 passenger Ford F-650 party limo, we called it “Andre“, a 16 passenger Barbie Pink Hummer H2, we chopped the roof off that and raised it 5″, and last but not least an incredible 16 passenger Cadillac Escalade.

Less than 6 months ago we sold each of the limousines in the Insane Limos fleet to private buyers and other limousine companies. However, we still hold the Insane Limos trademark and I have all intentions of revisiting this business after we sell our chain of tanning salons and retire.

Insane Limos was sold to generate cash for the private labeling of Extreme Tan and Smoothies indoor tanning products and fund a new business we currently have underway.

A little over six months ago we decided to move forward with a safe tanning, sunless spray tan salon concept that we’ve been working on for a while now. If things go as planned with Extreme Spray Tan we will have 3 dedicated spray tanning salons in the Tampa Bay area providing sunless tanning and skin rejuvenation services. 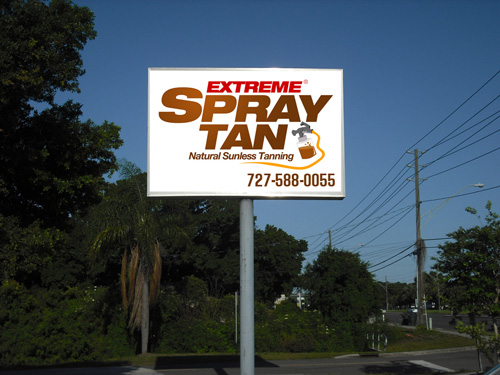 Before I hit the door and end the longest About Me page ever created in history I want to touch on a few current things. Pretty much everything you see above is current, however, I failed to include a section that explains my addiction to social media and social media marketing.

As stated above, I am addicted to all forms of social media, social media marketing and using social media to connect with other small business owners, tanning salon owners and bloggers that are on the come-up, maybe even a few entrepreneurs as well.

You can catch me on Twitter with somewhere near 20,000 tweets and retweets, don’t hold back feel free to say “hey” or anything else @extremejohn. In addition to Twitter I can often be seen fielding questions or having giveaways on my personal Facebook Page and the Extreme Tan and Smoothies Facebook Fan Page. If doing business privately  is more your thing you can always connect with me on LinkedIn or via my contact form.

Last but not least if you just feel like reading a few of the posts here from time to time consider taking a moment to subscribe to my RSS feed.

If you haven’t had enough yet you can always read “22 Things About Me That You May or May Not Know“.